Can You Be Charged with an Open Container Violation While Driving a Horse-and-Buggy?

Non-celebrity DWI cases typically do not make national headlines. But there is always the exception that proves the rule. Consider this recent CNN report: A local sheriff’s department in Ohio is currently looking for two men suspected of drinking while driving a horse-and-buggy.

According to CNN, the two men are apparently members of the local Amish community in Ohio. The Amish are an Anabaptist Christian denomination known for their reluctance to adopt modern technology. Among the more well-known characteristics of the Amish are their use of traditional horse-drawn buggies in lieu of automobiles.

Here, the deputy said he observed the two men while on a routine patrol of the local Amish community in Trumbull County, which is located in northeastern Ohio near the Pennsylvania border. The deputy said he observed the men “carrying a 12-pack of Michelob Ultra” and operating a stereo while driving their buggy. When the deputy stopped to question the two men, they “leaped out of the buggy and disappeared into the woods by the side of the road.” 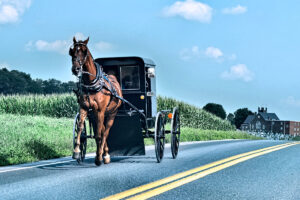 Assuming the two men are identified by law enforcement, they could face DWI charges. This might sound odd to some people. Many people assume that drunk driving laws only apply to vehicles like cars and trucks. But that is actually not how the law works in most states, including Ohio and Texas.

In Texas, it is a Class B misdemeanor to be “intoxicated while operating a motor vehicle in a public place.” Now, you might think the term “motor vehicle” clearly refers to a car or truck–i.e., something with a motor. But the DWI law actually relies on the definition of “motor vehicle” used another part of the Texas Penal Code, which defines the term as follows: “a device in, on, or by which a person or property is or may be transported or drawn on a highway, except a device used exclusively on stationary rails or tracks.”

In other words, you do not need a “motor” to have a “motor vehicle.” Furthermore, under Texas’ open container law, you can be charged with a misdemeanor if you possess an open can of beer in a “motor vehicle.” So in theory, it is a crime to operate a horse-and-buggy on a public roadway with an open can of Michelob Ultra in the cab. And if the operator of the horse-and-buggy otherwise met the criteria for legal intoxication, he could be charged with DWI.

We may not see many Amish horse-and-buggy DWI cases here in Houston. But there are other types of vehicles that fall within the broad scope of the state’s DWI and open-container laws. If you have been charged with a violation and need legal representation from a qualified Houston DWI defense lawyer, contact the Law Offices of Tad Nelson & Associates today. We represent clients throughout Houston, Galveston, and League City.